The Republicans are coming off a win with the historic year end passage of their Tax Cuts and Jobs Act. However, there won’t be much time for them to rest on their laurels as there is a lot that Congress needs/wants to get done before the inevitable slow-down that will occur as early as late spring in advance of the 2018 mid-term elections.

The biggest thing looming right now is the fact that the federal government is only funded through January 19, 2018. As you may remember, Congress was unable to agree on a spending bill for federal fiscal year 2018, which began on October 1, 2017, and has been kicking the can down the road using multiple short term extensions (known as continuing resolutions or CRs). The latest CR runs out on January 19, meaning that Congress either needs to pass a full spending bill by then, pass another CR or risk a government shutdown (which neither party has much interest in seeing happen).

At this point it is likely that we will see at least one more CR to extend the deadline for an appropriations package beyond January 19. The first step that’s needed before a final funding package can be put in place is an agreement on top line spending numbers which will need to be bi-partisan in order for the budget to pass the Senate. This in itself may be a challenge because, while there is fairly broad support for increasing military spending, the parties have differing views on the domestic spending levels. Once the top-line numbers have been reached, the detailed appropriations will then need to be made.

Beyond reaching an agreement on the budget itself, the budget process also poses a challenge for Republican leadership because the need for bi-partisanship on the budget offers the Democrats a bargaining chip that tends to be rare for the party in the minority. The big item the Democrats are hoping to trade for a budget deal is legislation dealing with immigration. Specifically, in September, President Trump ordered an end to President Obama’s Deferred Action for Childhood Arrivals (DACA) program which protected qualifying undocumented immigrants who were brought into the country as children (known as “dreamers”) from deportation and allowed them to legally work in the country. Since then, Democrats have been pushing for legislative action on this issue. President Trump has now indicated that he won’t be willing to sign off on a budget deal that includes provisions to protect dreamers unless the deal includes funding for the border wall and potentially more controversial immigration provisions. Moreover, the Freedom Caucus in the House has already announced that it will take a strong stance against including dreamer protections in a budget deal.

While the most prominent and controversial issue at this point, immigration isn’t the only item that might get wrapped into the budget process. Congress also needs to deal with funding hurricane and wildfire disaster relief and the Children’s Health Insurance Program (CHIP) and it is likely that these items will considered as part of a larger budget package. Moreover, with the recent announcement by Attorney General Jeff Sessions to facilitate the enforcement of federal marijuana laws, Republican Senator Corey Garner (R-CO) has indicated that he might use the need for his vote in the budget process as a bargaining chip to scale back this step.

It’s important to remember in all this discussion that right now we are talking about a federal fiscal year that’s already almost halfway done. Unless the chambers are able to reach an agreement on the 2019 budget and appropriations at the same time as 2018, they will be back to this process again in September. Therefore, the ideal scenario for Congressional leaders will be to pass an omnibus package to provide funding for both the 2018 and 2019 fiscal years.

One of the big challenges for the Republican leadership in the Senate that will affect both the immediate budget debates and the passage of any legislation this year is the fact that in general they will need bi-partisan support and, as of last week with the swearing in of new Senator Doug Jones (D-AL) their majority has narrowed to fifty-one seats. Already, last year, Vice President had to cast more tie breaking votes than any Vice President in the last 145 years.Additionally, Republicans may also have to account for the absences of Senator John McCain (R-AZ), who is fighting brain cancer, as well as a few other members dealing with health issues.

Beyond the budget, the biggest agenda item that we expect to see the White House pushing Congress on this year is infrastructure. Generally, infrastructure investment tends to be less controversial, however, the parties have already begun to take sides on the issue. Last year, when it looked like the Republicans were starting to gear up for an infrastructure bill without including Democrats in the discussions, the Democrats released their own infrastructure plan. The White House has announced that it will be coming out with its own more detailed proposal on infrastructure soon, potentially as early as this month. With the increases to the deficit created by the tax reform bill, there may be challenges on both sides of the aisle both with respect to the funding and details of an infrastructure bill.

Less likely, but still on the table is welfare reform. In recent days House Majority Leader Paul Ryan (R-WI) has been trying to make the case that, now that it has passed comprehensive tax reform, Congress should take up welfare reform (which would be favored by the Trump base). Congressman Ryan’s plan would be to use budget reconciliation on a 2019 budget to pass welfare reform with a simple majority. However, Senate Majority Leader Mitch McConnell has made it clear that he and the Senate leadership team have very little interest in diving into the issue of entitlement reform, which could be politically dicey in an election year and difficult to pass the Senate even with a simple majority. 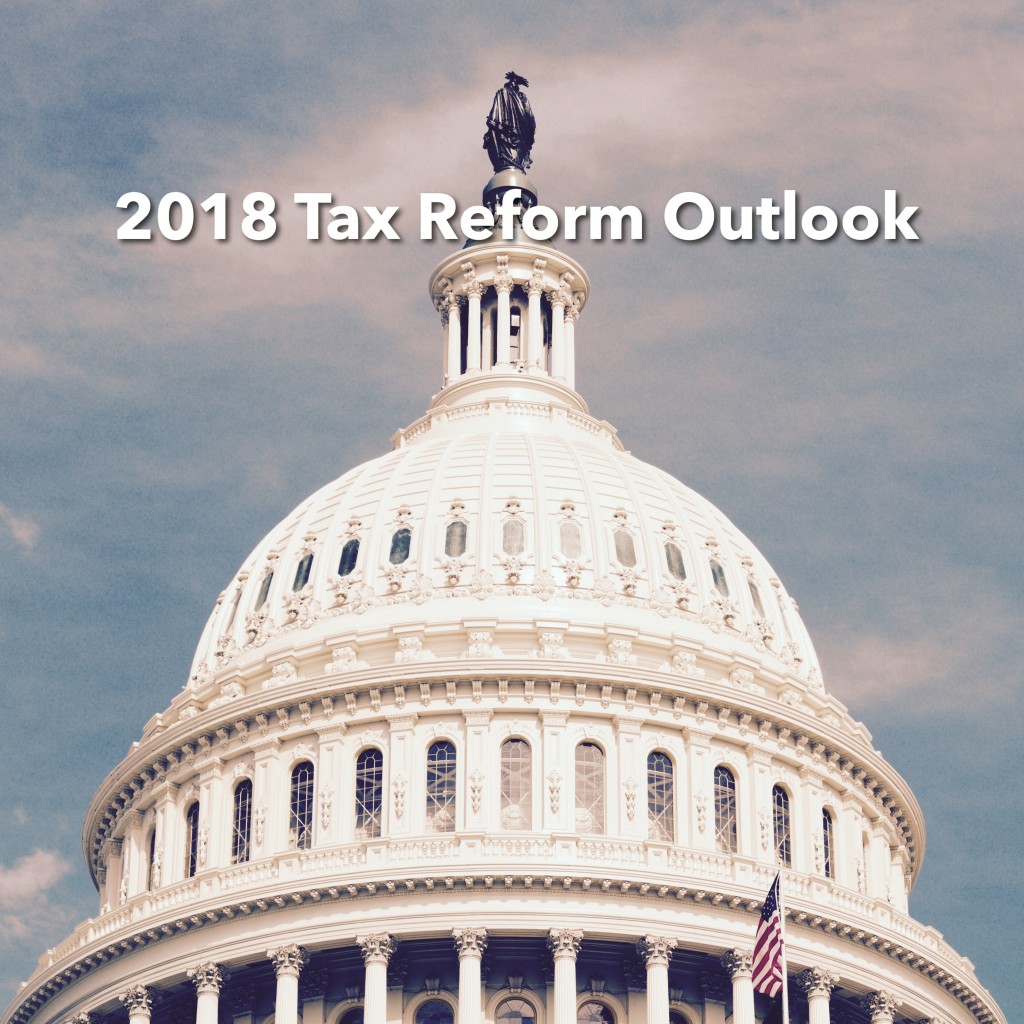 Another big issue which is worth noting is health care. While some conservative groups are continuing to push for repeal of the Affordable Care Act (ACA), at this point, the President seems content with the stripping of the individual mandate that was included in the tax bill and Senator McConnell has indicated no desire to revive the unsuccessful repeal and replace attempts that the Senate went through last year. However, this doesn’t mean the end of the health care discussions in Congress. The new tax bill stripped the ACA of the individual mandate (by reducing the penalty to zero) which by most estimations is likely to result in significant premium increases for many health insurance plans. This is because the individual mandate brought in younger, healthier people into the health insurance risk pool which helped to keep the costs down. If these younger, healthier people decide to forego insurance coverage as many are expected to do, then insurance costs will have to rise because the risk pool will become populated by more older, sicker people. In order to get Senator Susan Collins (R-ME) to vote for the tax bill, the Republican Senate leadership promised her that the chamber would get to the issue of trying to stabilize the insurance marketplace this year. The premium and marketplace stabilization issue has actually been an open concern since before the tax bill passed. Weaknesses in the marketplace were significantly exacerbated in October when President Trump announced that the government would stop making ACA cost sharing payments. In response to the President’s announcement, Senators Patty Murray (D-WA) and Lamar Alexander (R-TN) had negotiated a bi-partisan bill to reinstate the cost sharing payments in exchange for changes to ACA that was never brought to the Senate floor. However, now Senator Murray has indicated that she is uncertain whether that bill will be enough to stabilize the markets in light of the individual mandate repeal.

All in all, we expect that there will be a lot to watch in 2018 – before we even get into what is certain to be an interesting election season.